So I am officially inseminated. Weird, right? Let me back up a bit and start from the beginning of the week. Everything went exactly as planned – just kidding, NOTHING went as planned.

When we were sitting in the first orientation back in May and they were going over what will happen, how we may have too many follicles and that would prompt the cycle to be canceled and how we may need a trigger shot of HGH if they suspect I won’t ovulate early enough, I thought to myself both times, “that won’t happen to me”. What I DID think of was the trauma I went through with the hystersonogram and how they couldn’t get my cervix to dilate and they just kept poking longer and thinner objects on my insides. If you recall, that was when they decided to do the laparoscopy surgery because it was too painful for me to endure the rest of the procedure.

I’ll get to that later.

First, let’s go back to the beginning of the week – Monday, my day 10 ultrasound. Everything goes according to plan and everything looks good.

“No concerns for overstimulation this time, just keep testing every day and call us when you detect a surge in your urine. If no surge detected on Wednesday, call us”, I was told. The week had many obstacles – the iui couldn’t happen on Wednesday as I had my friend Niki’s bachelorette and it couldn’t happen on Saturday because my partner was going to be away working on an important job site. He would be able to produce his sample, but not be there for the insemination, which I really would have preferred him to be there, like come on! Although, I had many lovely friends offering to come with me – not sure how much fun that would have been for them, though.

Of course, no surge Wednesday.

Thursday they’re optimistic about my follicles but not that I will ovulate. “Come back Friday- we’ll decide tomorrow if we have to cancel or go ahead”.

On my way to the hospital, on Friday the 13th, I run over some doves. First of all, birds USUALLY fly away when you drive towards them but not today! I cry. What a great start: omen looking grim.

Follicles look good, but I have to take a trigger shot that night to force my follicles to ovulate and release an egg. Of course, I LOVE needles!! (grrr) But that means the insemination will happen on Sunday!  The whole week I’m dreading it happening on Saturday because I didn’t want to be alone. Although I would have had a friend with me, to be honest I really want to make sure Jason sees every agonizing thing I have to go through, that’s my real motive. That’s also why I make him watch while I get the trigger shot.

“Look at all the crap I have gone through, so you better appreciate this damn baby if it ever happens!” – I’m only half joking.

Then we find out that if it’s raining on Saturday, he has to go to work on the Sunday instead. More uncertainty but it all worked out – on that front, anyway.

Now here we are, day of the insemination. On the day of his analysis, 32mil good quality sperms were produced out of 58mil. The amount they want is 7mil so we are looking GOOD in the sperm department.  But no, today, the one important day, the only one that matters, only 1.7 mil only are usable sperm. I’m unsure what the rest of the sperms do, swim in circles? Who knows but they suck and we only have 1.7 mil sperm to use.  Luckily, we only need one good one.

Next step, dilate cervix to insert the sperm (I say sperm way too many times in this blog… sperm). Now, remember back at the beginning of this blog I said I was scared about the cervical dilation since I was traumatized by the hystersonogram last time? SAME thing happens. I’m in that room with my feet up in the air for 20 mins while they try to get through my cervix. They finally did after they tell me to cough on 3. I should have filmed it so I could show my future child what his mother went through to have him/her. That’s what mothers are good for, guilt – right?

Anyway, here we are and I’m crampy, still bloated from the HGH shot and eating all the ice cream. 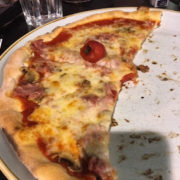 Well, do you FEEL pregnant??

Oh Canada and all your beautiful diverse people

Nothing Good Ever Comes Easily

When your weightloss goal needs to take a backseat

France – We’re Getting Poorer by the Minute
0 replies

Want to join the discussion?
Feel free to contribute!

Before this beautiful flower was a flower, we thou

I hope everyone is enjoying the last bit of these

Don’t forget to have fun while fighting for your

All the benefits of personal training but at half

Oh Canada and all your beautiful diverse peopleWell, do you FEEL pregnant??
Scroll to top

This site uses cookies. By continuing to browse the site, you are agreeing to our use of cookies.

We may request cookies to be set on your device. We use cookies to let us know when you visit our websites, how you interact with us, to enrich your user experience, and to customize your relationship with our website.

Click on the different category headings to find out more. You can also change some of your preferences. Note that blocking some types of cookies may impact your experience on our websites and the services we are able to offer.

These cookies are strictly necessary to provide you with services available through our website and to use some of its features.

Because these cookies are strictly necessary to deliver the website, refusing them will have impact how our site functions. You always can block or delete cookies by changing your browser settings and force blocking all cookies on this website. But this will always prompt you to accept/refuse cookies when revisiting our site.

We fully respect if you want to refuse cookies but to avoid asking you again and again kindly allow us to store a cookie for that. You are free to opt out any time or opt in for other cookies to get a better experience. If you refuse cookies we will remove all set cookies in our domain.

We provide you with a list of stored cookies on your computer in our domain so you can check what we stored. Due to security reasons we are not able to show or modify cookies from other domains. You can check these in your browser security settings.

We also use different external services like Google Webfonts, Google Maps, and external Video providers. Since these providers may collect personal data like your IP address we allow you to block them here. Please be aware that this might heavily reduce the functionality and appearance of our site. Changes will take effect once you reload the page.